See first hand a Global Insights Report and how it can help you create hi-performing ad creative.

Thank you! Your submission has been received!
Oops! Something went wrong while submitting the form. 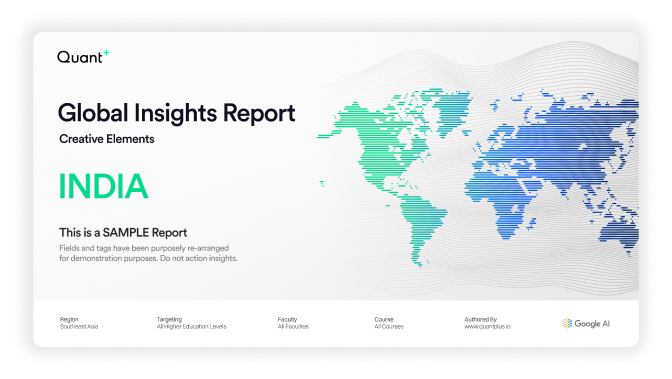 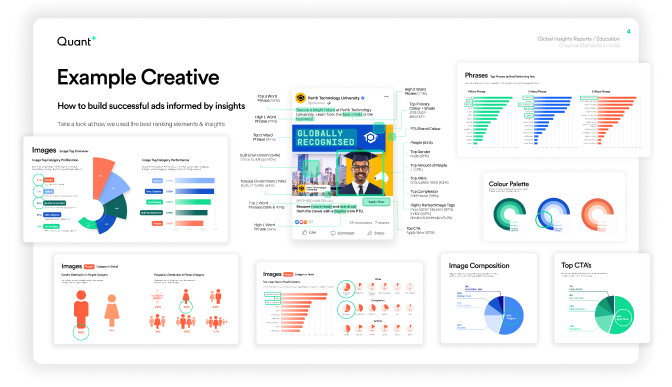 No items found.
Product is not available in this quantity.

How AI is Boosting the Growth of Education Brands

With so many education providers worldwide, how are the leading brands advertising for student enrolments?

All education providers around the world face the same challenges when developing their international recruitment campaigns.

They seek to adopt a coherent brand voice that, in accordance with their guidelines, communicates consistently across all markets. At the same time, they try to localise their creative to ensure their message strikes a chord with students from the different countries.

How can they know if Korean students respond better to an ad featuring a man-made environment rather than nature?

For an Australian Education brand, it would make sense to showcase the beautiful landscapes and open spaces that, we think, make the land down under so attractive to international travellers and students alike.

But can they be sure that’s the best approach? And how can they know that what works for a Korean student also works for a Japanese one? The two countries may be close to each other, but their cultures are unique.

The truth is that geographies react differently to the same creative. To uncover trends and learnings in each country, marketing teams could review past campaigns. However, analysing trillions of impressions across hundreds of ad variants is a task no human can perform alone and in a reasonable time.

These days, marketing managers are also pressured to achieve more with less. In this context, deep dives into the cultural nuances of all countries are simply not a viable option. They require time and budgets that most organisations don’t have access to.

That’s why, ‌until now, education brands have mostly relied on intuition or guesswork to develop their international campaigns.

To overcome these challenges, some higher education organisations have leveraged the data processing and machine learning capabilities of the latest AI technology.

They have fed AI with trillion data points from their past campaigns to identify patterns, trends, and insights.

The result? They now know what the highest performing creative elements in an ad are.

Some education brands have achieved 300% ROI and some others have used AI to pivot their creative and achieve KPIs they would have otherwise never met.

One of them is TAFE Queensland, which started developing a creative campaign based on what they assumed international students would respond to.

Before progressing further, they took on board the creative insights generated by QuantPlus AI to learn what makes Japanese or Korean students really tick.

The insights they gained were hard to believe – and so were the results they achieved after implementing them.

How AI has helped TAFE Queensland increase their ROI

Learning about innovative technologies from leading professors in state-of-the-art facilities while getting close to Australia's indigenous culture. This was the recipe TAFE Queensland developed for their marketing campaign to attract Korean and Japanese students to their shores.

They leaned on striking imagery developed by high-end photographers to bring to life the excitement of being a TAFE Queensland student and the opportunities in store for them.

Below are some images they were going to run in their ads. From students involved in a coding hackathon…
‍

…to nurses getting acquainted with the latest augmented reality applications.
‍

They are well composed, contemporary in look and tell the right story… to someone viewing them from a western perspective.

But what do Japanese and South Korean students think of them? That’s the question TAFE Queensland asked QuantPlus.

They extracted data from over 1 trillion education ads, weighted these results against their core target market and offered entirely new insights into the creative elements that have historically performed within those two countries.

“We are not afraid to challenge traditional thinking. Particularly if the end result can lead to better outcomes for our students or TAFE. QuantPlus was a very compelling product to trial,” says Marty Lock, Manager International Student Engagement, TAFE Queensland.

TAFE’s International Marketing team could not believe the insights from the report.

Out of these three colours, only some shades of blue were used in the original set of images, but red and grey were absent.

The team was also surprised to learn that nature is not as appealing to a Japanese student as they believed.

It only came in fourth place after built environments, people and objects, followed by wearable or mobile technology objects and vehicles.

Which type of built environments ranked the highest? Rooms come first, then there are universities, office buildings and public spaces.
‍

‍
With 62% of the top performing ads having a female as the hero, women had to take centre stage in the new campaign.

The report drilled down into the details around the people featured: if they were smiling or had a natural expression, if they were looking at the camera or focused on a specific activity and what the angle of the photo was. QuantPlus provided details around ethnicity, skin complexion, clothing and accessories people were wearing.
‍

But QuantPlus considered not only the visual aspects of the ad. The report also analysed the best performing copy options, ranking them by sentence length (from one to four words) and providing what is sure to drive a response from the audience.

With the confidence gained from all these learnings, the International Education Marketing team at TAFE Queensland developed their new campaign, one that looks very different from what they initially considered.

Look at the ads below to see if you agree.
‍

The above and below ads show students in rooms and university spaces, focused on learning activities. One is smiling, the other has a neutral expression, and both of them are captured in a casual setting.

What about the leafy plants in the first ad? The report showed that Japanese students prefer them over Australian beaches and landscapes.
‍

The campaign uses red as the primary colour and includes the most hard-working words when it comes to education advertising in Japan.

The team considered many other elements from the report, then used their experience and creativity to develop the new ads.

The result? With this campaign alone, TAFE Queensland increased their ROI by 33% and attracted 90% of unique visitors to their landing page.

And what about South Korea?

For Korean students, relatable ads show people like them interacting with tech. They smile and have prescription glasses.
‍

Tablet and desktop computers came on top as the most appealing type of tech, while the highest performing colours for this market were red, grey and blue.
‍

However, the biggest difference was the terminology. “QuantPlus showed us that markets such as Japan like a more direct language ‘get in now’, ‘sign up’, ‘find out’, whereas Korea is more subtle, preferring words such as ‘explore’, ‘research’ and ‘learn’,” says Marty from TAFE.

“This was at odds with what we believed to be true. Based on our gut feel, we thought the reverse view of engagement, Japan more subtle and Korea more direct. But this is simply not the case.”

Despite several similarities across the two countries, taking into account these nuances has proven vital to maximise the campaign's success rate.

In South Korea, TAFE reached and engaged twice as many people compared to the previous campaign at half the Cost Per Click.

Similarly to Japan, this creative attracted 90% of unique visitors to their landing page.

QuantPlus is the organisation boosting the ROI of TAFE Queensland and other education brands across the APAC region.

When localising or developing new campaigns for international markets, cultural sensitivity is everything.

When people come across an ad, one of the first evaluations they make is if the image portrayed “matches” their set of values, aspirations and needs. With a cognitive shortcut, they ask (often subconsciously): “Could that be myself?”

If there’s too much distance between the image they hold in their head (i.e. the perception of themselves) and the one they see, they throw the product or service into their “not for me” basket.

That’s why visual queues, words and other apparently insignificant elements can make a world of difference.

QuantPlus Creative Reporting focuses on all the things that can be directly measured around the look and feel of the ad. What is the ad composition? Does it feature photography or an abstract artwork? What’s the principal theme? What location, people, objects and colours are featured? All is considered and ranked.

The insights also identify the strongest call to action, the optimal male vs female split, as well as top performing primary and secondary text. That’s how AI’s predictive technology takes the guesswork out of international student recruitment campaigns.

According to Marty Lock: “The data we received from QuantPlus and the work we have done with them allows us to understand where we can go creatively and how we can position ourselves to get the right audience”.

Today, QuantPlus helps education brands save time and thousands of dollars in research funds. For the first time, it also provides the organisations who could never afford those budgets with decisive market intel.